THIS JUST IN: Replacing Dima Slobodeniouk in ZaterdagMatinee 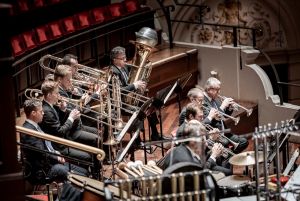 Mr. Burghgraef will replace maestro Dima Slobodeniouk in a concert with The Netherlands Radio Philharmonic Orchestra on Saturday 29 January 2022 in the Amsterdam Concertgebouw in the series ZaterdagMatinee. He will conduct the orchestra in the Dutch premiere of the Horn Concerto by Hans Abrahamsens.

ZaterdagMatinee writes:
'You would expect a horn concerto from a composer with a past as a horn player. But the Hans Abrahamsens Horn Concerto is not a piece in which virtuosity and lyricism neatly balance each other. The horn player initially relates to the orchestra as a traveler to a foreign country whose language he does not seem to be fluent in. In the second part, 'stormy and restless', you can hear how he tries to make contact impatiently and more and more insistently. This pays off in the third part, where the parts 'plötzlich freundlich fließend' begin to communicate with each other. Due to the refined transformation from absent-mindedness to intense concentration, the piece is unlike anything. Soloist is Stefan Dohr, principal horn player of the Berliner Philharmoniker, who premiered the piece in January 2020 in Berlin.'